For the Life in a Day project on Youtube. Here's the video the still is from.
Posted by Jason at 8:00:00 PM No comments: Needless to say ... wow. Inception was, to say the least, an intriguing and thrilling ride that I will most likely take again.
Posted by Jason at 11:58:00 PM No comments: I discovered a video in my subscription box yesterday from Roxanne, a web friend who attended VidCon (a video making conference set up by Hank Green of the Vlogbrothers), that showed Dan Brown talking about his life-changing idea. I watched it ... and it got me thinking ...
Before you go on, if you haven't seen the video about Dan Brown's Super Secret Project, here you go.


Now, I have three qualms about this whole project.

Qualm the First: Now, my main qualm is this: what about free will? For a year, Dan is giving control of his life to hundreds, thousands, millions of people, a good majority of whom don't know him. From what I can surmise, it seems that Dan won't be able to do things HE actually WANTS to do during the duration of this project. But we'll see how things will turn out.

Qualm the Second: Another one of my qualms is he dropped out of college for his. Sure, he can continue his education at a later date, but interrupting your pursuit of a possibly useful degree to let people control your actions for a year? It doesn't settle well with me. Yes, Youtube has become his main source of income. Yes, he has garnered a large audience, one that I'm a small part of. But ... he seems to have become a larger-than-life person ... and I would rather watch a regular Dan going through his day and living his life and talking about interesting topics than other people telling Dan how to live his life for a year. Does this mean I'm going to unsubscribe? I don't know. Maybe in the future at some point. But I'd like to see how things turn out.

Qualm the Third: As the project is based on idea submissions and voting ... what if asinine suggestions make it to the top? What if Dan doesn't like or care for the top-voted idea on a certain day? What if he doesn't like ... I don't know, the breakfast choice voted number one for the day? What if it is one brand of cereal for a week straight in the mornings? Now, I like cereal, but I don't have it every morning. I might have it two mornings in a row and then I'll have eggs or a bagel or toast the next day to change things up. So ... what if the submissions become rigged? Yes, it'll make for amusing or potentially humiliating videos ... but that doesn't mean that the videos will be engaging to the community, like a good number of John and Hank's videos, like when John ate toilet paper while discussing the political situation in Nepal. ... Just do a search for that video. 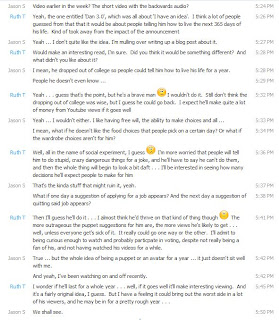 My discussion with Ruth on the matter.
So ... what are your thoughts on the matter? By the by, I'd suggest checking the comments on the video for some interesting discussion.